99 still missing in rubble of the collapsed condo in Florida 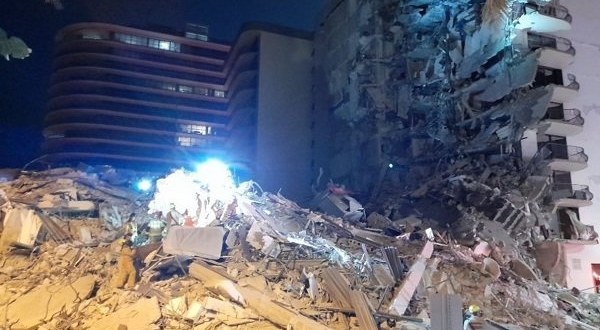 A Florida high-rise that collapsed Thursday morning was determined to be unstable a year ago, according to a researcher at Florida International University.

The building, which was constructed in 1981, has reportedly been sinking at an alarming rate since the 1990s, according to a study in 2020 by Shimon Wdowinski, a professor in the Department of Earth and Environment.

When Wdowinski saw the news that the Champlain Towers South condominium in Surfside collapsed, he instantly remembered it from the study, he said.

“I looked at it this morning and said, ‘Oh my god.’ We did detect that,” he said.
Meanwhile, search and rescue teams have continued the delicate work of picking through a mountain of rubble, looking for even the faintest signs of life that might be buried inside the two-story-high remains of the partial collapse of the 12-story oceanfront building, Champlain Towers South Condo.

Nearly 12 hours after the building came crashing down, the death toll remained unknown. Officials confirmed at least one death, and said 35 survivors were pulled from the wreckage, with 10 injured persons treated at the scene and at least two transported to a hospital.

JUST IN: Video I’ve obtained of the building collapse in Surfside, Florida. pic.twitter.com/BGbRC7iSI9 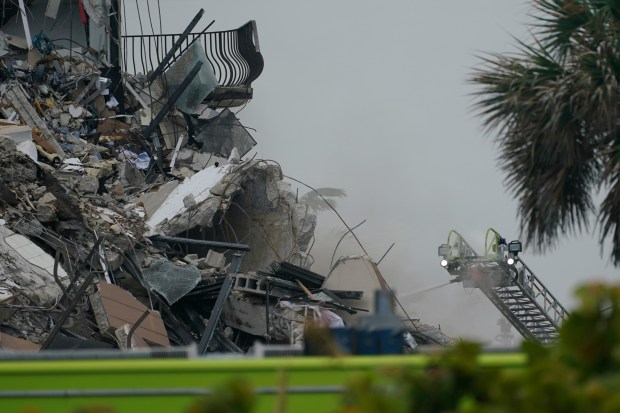 Fire rescue personnel conduct a search and rescue with dogs through the rubble of the Champlain Towers South Condo after the multistory building partially collapsed in Surfside, Fla., Thursday, June 24, 2021. (David Santiago/Miami Herald via AP)

Miami-Dade County police said as many as 99 people are reported missing. There were about 55 units in the tower that collapsed, rescue workers said. An attached tower housing the remainder of the 136-unit complex remained standing Thursday afternoon but its residents have been evacuated.

Witnesses said the disaster was so sudden at a time when most residents were still in bed. The tower at 8777 Collins Ave. crumpled with “a bang that just kept on going,” one witness said, a little after 1:30 a.m.

@AgendaFreeTV I am a resident of one of the condos on the side of the collapse. This is a video from my camera footage inside from the start of the collapse until the lose of connection (I was away from the building today). Towards the end, you hear the structure failing pic.twitter.com/UzBJQogUxp

Officials say they do not still know what caused the building collapse. Investigations and rescue operations are still on. Read more

Question: What caused the collapse?