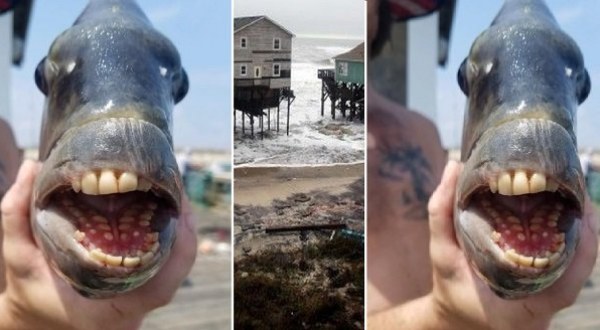 A photo of an unusual fish with human-like teeth caught near Nags Head in North Carolina was shared on Facebook this week by Jennette’s Pier.

The fish, which was later identified as a sheepshead fish,  has several rows of teeth, including molars for crushing prey.

The fish appears to have been given its name due to its mouth looking like the mouth of a sheep. It was reportedly reeled in by Nathan Martin, a regular on the pier.

Martin said he had been hoping to catch a sheepshead fish when he came face-to-face with a “mouth full of teeth”.

“It’s a very good fight when you’re fighting on the line, it’s a really good catch, and it tastes very good,” he told McClatchy News.

The post – captioned with the hashtag #bigteethbigtimes – caused quite a stir.

“Is this where dentures come from?” wrote one user.

“That fish has better teeth than me,” wrote another.

Officials with the North Carolina Aquariums said that these fish are extremely difficult to catch.

The fish is not listed as endangered or vulnerable with the World Conservation Union.

When they’re young, sheepshead fish will eat marine worms, bryozoan ‘moss animals’ and pretty much anything soft-bodied they can catch in the seagrasses, according to Scientific American.

Although thick, sharp teeth begin to appear when a sheepshead is just 4.5 mm long, it will have to wait until it’s about 15 mm long before all the incisors have come in and the back teeth begin to develop into adult molars. Once they reach around 50 mm in length, the sheepshead will advance to eating more robust, armored prey such as echinoderms, barnacles, clams, crabs and oysters, using their highly specialized teeth.