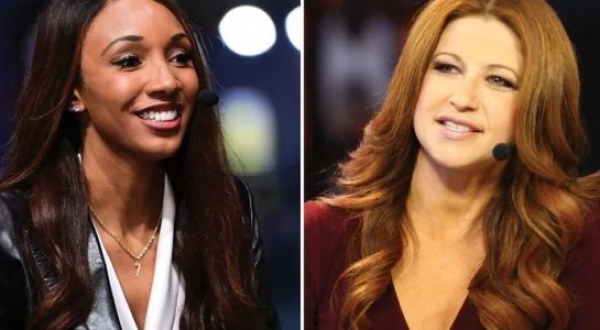 ESPN has removed Rachel Nichols from covering the NBA Finals from the sidelines after a recording surfaced of her making disparaging comments about her colleague, Maria Taylor.

In the leaked audio, Nichols, who is White, reportedly criticized ESPN last year for choosing Taylor, who is Black, to report on the sidelines of the NBA Finals over her.

Nichols wasn’t aware her conversation with Adam Mendelsohn, a public relations adviser to LeBron James, was being recorded and uploaded to ESPN’s server and later leaked by a former digital video editor. During the more-than-20-minute phone call, Nichols complained about being replaced by Taylor on NBA Countdown, the network’s NBA pregame show, despite saying it was in her contract.

“I wish Maria Taylor all the success in the world — she covers football, she covers basketball,” Nichols said in July 2020. “If you need to give her more things to do because you are feeling pressure about your crappy longtime record on diversity — which, by the way, I know personally from the female side of it — like, go for it. Just find it somewhere else. You are not going to find it from me or taking my thing away.”

According to The New York Times, multiple Black ESPN employees said the conversation confirmed suspicions about white colleagues who speak differently in person they do in private. Nichols appeared alongside two Black colleagues on Monday’s The Jump — former NBA players Kendrick Perkins and Richard Jefferson — who attempted to navigate the awkward situation as best they could.

Nichols apologized on Monday’s edition of “The Jump,” a show she co-hosts on ESPN.  “I also don’t want to let this moment pass without saying how deeply, deeply sorry I am for disappointing those I hurt, particularly Maria Taylor,” she said.

Rachel Nichols began today's episode of The Jump with this apology to Maria Taylor and others at ESPN https://t.co/9cXsDmMMhZ pic.twitter.com/yQj5j8akMw

“This Rachel Nichols scandal is a perfect storm for ESPN, which has always had a fumblefingered approach to racial diversity, gender parity and its corrosive star system,” NPR media critic Eric Deggans wrote on Twitter Monday.

ESPN announced Tuesday that Nichols would no longer be the sideline reporter during ABC’s coverage of the NBA Finals, replacing her with Malika Andrews. (ESPN and ABC both are owned by The Walt Disney Company.).

“We believe this is best decision for all concerned in order to keep the focus on the NBA Finals. Rachel will continue to host The Jump,” an ESPN spokesperson told the Inquirer.

A video Taylor shared on TikTok in August 2020 resurfaced online, where she said that society sometimes tells Black women “you don’t deserve that promotion, even though you know you do.”

“They may tell you that when you get the promotion, that you only got it because you were Black,” Taylor said in the short video. “But we know that’s not true.”