Carolyne Kangogo, the 34-year-old fugitive police officer accused of murdering a male colleague and another man in a hotel room, has been found dead in apparent suicide, according to local media reports.

Kangogo’s dead body was found at her parent’s home in Anin village, Elgeyo Marakwet County at 8am on Friday. Her lifeless body was discovered lying in a bathroom at her parents’ home and moved to Iten County Referral Hospital mortuary, the report say.

Rift Valley Regional Commissioner George Natembeya, reportedly said that Kangogo died of self-inflicted gunshot wounds to the head. However, some twitter users believe she did not kill herself. Autopsy is yet to be done.

Caroline Kangogo reportedly apologized for killing her colleague in a detailed ‘suicide note’.

Kangogo was the main suspect for the murder of two men – John Ogweno, a police oficer and Peter Ndwiga, a businessman in Juja. Detectives say the Nakuru based police officer shot dead her colleague, constable Ogweno, on Monday, July 5 and fled to Juja where she allegedly killed Ndwiga, 32, in a hotel room.

According to hotel attendants, Ndwiga checked into the Kimbo facility on July 5, 2021, at around 4:30pm in the company of an unidentified woman and booked room number 107. Kagongo was later spotted on CCTV exiting the room at around midnight before fleeing to an unknown destination. Ndwiga’s body was later found on the bed.

Her training and experience as a crime-buster in the police service seemed to have worked in her favor making it difficult for the police to pin her down. Details from her file portray her as an experienced, well-trained and widely travelled person.

“She has served in Mombasa, Nyeri and Nakuru and hails from Elgeyo Marakwet. These and the alleged multiple lovers in different counties makes her elusive and unpredictable,” said a detective.

“This is a person who has interacted with every aspect of hunting criminals. She knows how we are doing it, and this gives her an opportunity to be a step ahead,” the detective said. 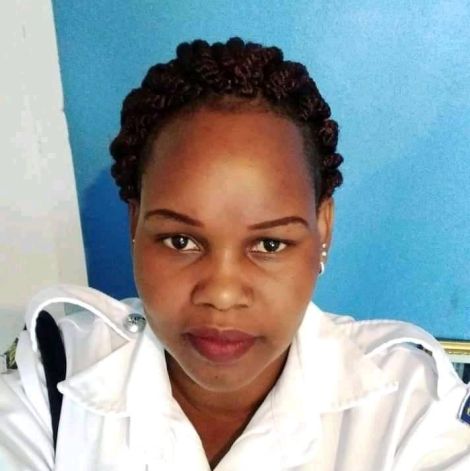 Kangogo was described as a party animal, but her exploits would sometimes turn nasty. She courted controversy wherever she went due to her penchant for picking quarrels and getting into fights.

“What happened could not have escalated to this level had her bosses taken action over her indiscipline,” said a police officer in reference to the murder of Constable John Ogweno.

A special team comprising officers from CRIB and SSU was sent from DCI headquarters to Kagongo’s rural home in Elgeyo Marakwet, and Kisii where she was believed to be hiding but the investigators’ work was hampered by the fact that the officer had dumped her known cellphone.

Kangogo: Ndwiga swindled me Ksh2.7m in a car deal
Kangogo asked to be buried at her parents’ home in a wedding dress #FridayNight@lillian_muli pic.twitter.com/WQdXb9vhq6

The police have, however, reiterated that it is yet to be proven that Kangogo actually shot and killed the two men.

“It is still not clear if Kangogo actually carried out the shooting or not. She was only a suspect and a person of interest because of the evidence found linking her to the scene.