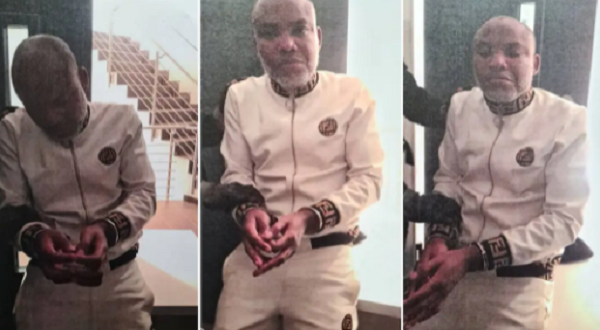 Nigeria has arrested Nnamdi Kanu, the leader of the proscribed Indigenous People of Biafra, IPOB.

Nigeria’s Attorney-General and Minister of Justice, Mr. Abubakar Malami(SAN), who made the disclosure to journalists on Tuesday, disclosed that Kanu was arrested and brought back to Nigeria on Sunday June 27.

He said the arrest was through a joint efforts of the security agencies in Nigeria and the Interpol.

Kanu, 54, was taken to the Federal High Court in Abuja on Tuesday for the continuation of his trial on charges bordering on terrorism, treasonable felony, unlawful possession of firearms and management of an unlawful society.

Nnamdi Kanu, a popular Nigerian figure, has been a thorn in the side of the Nigerian government since 2009 that he started his movement. He was initially arrested in 2015 and charged with treason but then fled the country in 2017 while on bail.

Kanu’s movement, the Indigenous People of Biafra (Ipob), was labelled as a terrorist organization by the Nigerian authorities.

He used his Radio Biafra station, which broadcasts from London, to call for an independent state for Igbo people. Most of the Igbos reside in South Eastern Nigeria.

Kanu founded Ipob in 2014 – the latest group advocating for BIAFRA – a country for Nigeria’s Igbos who Kanu and many others believe are being marginalized. Another group, the Movement for the Actualization of the Sovereign State of Biafra (MASSOB), existed prior to Kanu’s IPOB. MASSOB, led by Ralph Uwazuruike still exists, but not as widely known internationally as the IPOB. MASSOB also has a different way of pursuing its course.

The Igbo leaders, led by Chukwuemeka Odumegwu-Ojukwu, declared independence for the state of Biafra in 1967, but after a civil war, which reportedly caused the death of about two million people, the secessionist rebellion was defeated. The actual number of deaths during the war is not certain.

Since the Biafran war 1967 – 1970, the idea of Biafra has never gone away and despite arrests of his members, Kanu’s movement has seen a recent surge in its numbers.

According to the BBC, IPOB established an armed wing – the Eastern Security Network (ESN) last year – and the Nigerian government accused the group of being responsible for a number of attacks on police stations and other public properties in Southern Eastern Nigeria.

Nigeria’s President Muhammadu Buhari, who vowed to crush IPOB, tweeted last month about the security issues in south-east Nigeria and said “those misbehaving today” would be dealt with in “the language they will understand”.

The tweet was removed by Twitter for violating its rules after Buhari faced backlash, leading to a suspension of the micro-blogging site in Nigeria.

The president also recently referred to IPOB as a “dot in a circle” that can easily be crushed during a TV interview.

He was criticized by many Igbo leaders who felt he was referring to people of the Igbo ethnic group and not just IPOB. Read more about Nnamdi Kanu at the source