Side Chick who allegedly stabbed CEO of super TV to death begs the family to forgive her, says she does not want to die 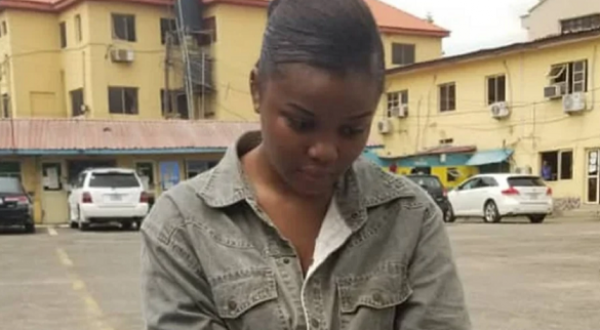 Chidinma Ojukwu, the 21-yr-old University of Lagos student involved in the killing of the Chief Executive Officer of Super TV, Usifo Ataga has begged the family of the deceased to forgive her.

“I was just trying to comport myself to answer questions during the parade and not that I am not showing remorse. I totally regretted everything I did and I am sorry. Mr Ataga’s family, I am deeply sorry for what I did. If I had my life back, I wouldn’t do anything like that. I am deeply sorry and I hope you forgive me.”

Chidinma and Ataga reportedly lodged in a service apartment in the Lekki area of Lagos State and the corpse of the latter was found in the room the next day.

Upon her arrest, Chidinma told the police that she had been in a romantic relationship with Ataga for about four months.

She confessed to police that they were “having fun” when an argument broke out and she stabbed him twice.

The side chick attributed her action to the influence of hard drugs and alcohol.

Chidinma said during the interview with PUNCH that her parents separated when she was two years old and she started living with her uncle, Chijioke Obi, in the Mushin area of Lagos State.

She added that while growing up, her childhood ambition was to become either a musician or an actress.

Upon completion of secondary school education, the suspect said she gained admission to study Mass Communication at the University of Lagos.

Asked about her assumed drug-induced lifestyle, Chidinma said, “I started smoking after I got into UNILAG.”

She also confirmed she’s the person in a trending video below showing a lady puffing out cigarette smoke while soft music plays in the background.

She stated, “I am the one smoking in the trending video. I started smoking a few years ago. Old-time friends introduced me to it and we don’t talk anymore. Everything started after I entered UNILAG, but not actually when I am in school, it could be other places. But I am not the one in the other video (dissociating herself from another trending video showing a lady exhibiting her butt).”

On her relationship with the deceased Ataga, Chidinma described him as just a friend she met a few months back, faulting claims that he neither took hard drugs nor alcohol.

Narrating some of the moments she spent with the deceased, she said, “Mr Ataga was a friend and I don’t know how to elaborate more. He has not shown me pictures of his family but he sometimes acts like he was married and not that he is married (sic). I have met him up to four or five times; he takes drugs and drinks alcohol. It is not that I am trying to put anything together.’’

Also, the police said that on Thursday they released Chidinma’s father and the operator of the apartment where the incident happened, Mrs Nkechi Mogbo, on bail. The suspect’s father was arrested over what the police described as obstructing the arrest of her daughter while Mogbo had been in police custody after investigation identified her as the operator of the apartment.

Odumosu said, “Chidinma’s statement exonerated her father as she said that he was not aware of the incident. We released him. Also, the lady in our custody, one Mrs Nkechi Mogbo, who leased the flat from the property owner and used it for a service apartment, has been released on bail.

“After Magbo was arrested, she assisted the police because of the information she gave us. Now that we got the principal suspect, and the fact that the principal suspect confessed that she singularly committed the act, and equally went further to explain that she never met Nkechi Mogbo, but that she only phoned her and that they transacted all the business online, I have ordered her release on bail while we continue our investigation.’’

There is a new twist to the story

According to a local news outlet, Sahara reporters, Asaga’s family claims that he was tortured before his death and  called on the Nigeria police to properly investigate the matter as an autopsy carried on his corpse has shed more light on the incident.

The family does not believe that only a 21-year-old girl killed Ataga, an amateur boxer. They believe there were more than one person involved in the murder.

A rope suspected to have been used to tie his hands was reportedly found inside the short-let lodging apartment situated at 19 Adewale Oshin Street in the Lekki phase 1 area.

The deceased’s elder brother, Dr. Isi Ataga, in a statement entitled, “Who will speak for Usifo Ataga?” also confirmed these findings.

He stated, “Usifo died a horrific death. He was not stabbed two or even five times; he was stabbed multiple times. His hands were bound tightly and the marks were still all over his wrists, accompanied with evidence of torture and assault even as his corpse lay in the morgue.

“And no one in the entire building heard his screams because he was gagged. Let that sink in, he was bound, gagged and tortured!”

“The now-viral video of the room with the deceased lying on the floor shows a room with blood-stained walls and floor, evidence of a ferocious struggle. One person could never have carried these out.”

Also, a childhood friend, Douglas Aniemena, stated that there were a “few shocking aspects of this heinous incident” which needed more investigation.

Speaking with Vanguard, he said, “The brutal and gory nature of his body; the amount of stab wounds, bruises, bound marks and other inevitable torture marks on his body. The salacious stories, rumours, and false narratives were particularly shocking also, in a most distasteful way.

“Usifo had a place in the VGC that he could have used apart from his home in Banana Island, Ikoyi.

“He has multiple friends who own hotels and short let apartments in the very same Lekki Phase 1 estate and neighbouring Ikoyi, that would avail him of their facilities if he so needed or asked. So, why would he allow and agree to meet up with someone in a short-let apartment that the person had booked?

“The only reason that makes remote sense to me, the only one I can fathom, and I will probably fall for as well, is, if it was set up as a place where some people or person I need to meet, perhaps investors, business I do not know, will come to meet and perhaps, do not want the publicity of hotel foyers or restaurants.

“I do not really know. I am struggling with that one. One thing is clear to me, he was set up to go there.

“The narrative introduced by the suspect, that he willingly gave her his ATM card and pin number, is as laughable as it is preposterous, especially with the proliferation of mobile banking. What would be the reason to give her his bank card and pin number and according to her, ask her to go and withdraw whatever amount she wanted? This is so absurd on so many fronts. Those who knew Usifo, will attest, that he would not talk and act like that; that is so unlike him.

“That notwithstanding, does it make any sense to you that he wanted to give her so much money, mind you, within the ATM withdrawal limit, and could not just transfer whatever amount via his mobile app! Come on, withdrawals via ATM have daily withdrawal limits far less than the amount that can be transferred via mobile banking app which we know he had and was used to make payments, why would he not simply transfer the sums she claimed he was freely offering?

“Does it not make sense that if this his supposed free will offering was to give you as much cash as you wanted, would he not have offered to transfer money to you as opposed to giving you his ATM card and pin number, (apart from the risk associated from divulging such, which is contrary to the behaviour of a person who was neither gullible nor naïve) would mean taking an Uber from the comforts of the apartment, to the ATM gallery, with the potential of standing in the queue and then needing multiple withdrawals to satiate your naira thirst.”