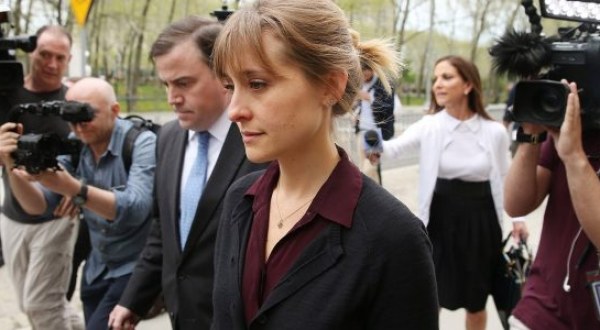 A federal judge Wednesday sentenced “Smallville” actress Allison Mack to three years in prison for her role in a purported self-help group that prosecutors say doubled as a secret sex cult.

The 38-year-old, best known for playing Chloe Sullivan on WB/CW show Smallville, pleaded guilty to charges of racketeering and conspiracy. Her role in the cult led by Keith Raniere was to recruit women to become his sex slaves. She was also fined $20.000 for her crimes, according to the report.

Mack and other group leaders used nude photos and other compromising material to pressure members into complying, prosecutors have said.

One victim, Jessica Joan, spoke at Wednesday’s sentencing, saying Mack emotionally manipulated her and eventually ordered her to “seduce” Raniere, with the promise that doing so would resolve her trauma from previous sexual abuse. Joan said she did not obey that order.

Joan called Mack “a predator and an evil human being” and said she was “cut from the same cloth” as Raniere.

District Judge Nicholas Garaufis said that Mack had been an “essential accomplice” in Raniere’s “monstrous crimes,” rejecting her lawyers’ plea for a sentence of home confinement or probation.

Based on federal sentencing guidelines, Mack faced 14 to 17 1/2 years behind bars, but prosecutors said she deserved less time because of her cooperation with investigators.

“She cannot undo what has been done, and she will have to live with the regret for the rest of her life,” Mack’s lawyers said in a court filing last week. “But Ms. Mack still holds the potential to be valuable to society — as a family member, as a friend, as a helper to those in need and as a cautionary tale.”

Mack said in last week’s filing she understands the physical and emotional pain she inflicted on cult victims.

“I have experienced overwhelming shame as I have worked to accept and understand all that went on and all that I chose,” Mack wrote.

Devoting “my loyalty, my resources, and, ultimately, my life to” Raniere, she said, “was the biggest mistake and greatest regret of my life.”

“I am sorry to those of you that I brought into NXIVM,” Mack continued. “I am sorry I ever exposed you to the nefarious and emotionally abusive schemes of a twisted man. I am sorry that I encouraged you to use your resources to participate in something that was ultimately so ugly.”

“Smallville,” a television series that ran from 2001 to 2011, featured a young Clark Kent before he became famous as Superman. Mack played Chloe Sullivan, his close friend.

Actor #AllisonMack is being sentenced today for her role in #NXIVM. She admits helping recruit women to be sex slaves. Here she is arriving at court earlier. @dlevywnyt is there and will have reports today on NewsChannel 13. https://t.co/Gt3dI2hJD5 pic.twitter.com/D1KWVZXRpf