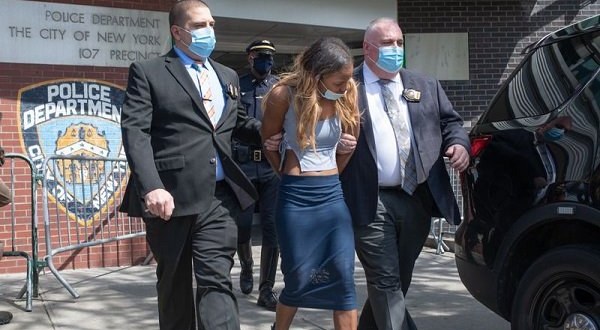 The boozed-up killer of a Queens highway cop in a horrific hit-and-run crash offered a tearful apology on Tuesday after she was finally captured following a mile-long police chase.

A 43-year-old NYPD officer died of his injuries after being struck by the drunk driver, Jessica Beauvais who was driving with a suspended license on the Long Island Expressway in Queens early Tuesday, Police Commissioner Dermot Shea said.

“I’m sorry,” Beauvais, 32, said as she was escorted out of the 107th Precinct stationhouse in Queens for her arraignment in the death of highway officer Anastasios Tsakos. “I’m sorry that I hit him and now he’s dead.”

The entire NYPD hurts tonight as we reconcile the loss of our brother. A loss not only for our NYPD family, but all of NYC.#fidelisadmortem pic.twitter.com/q8t6770Hms

Asked where she was coming from, Beauvais, who was dressed in a blue crop top, navy pencil skirt and matching booties, replied, “I was coming from the studio.”

“I did a podcast,” she added, holding her head down and sobbing as she was placed inside a police vehicle to head to Queens criminal court.